Do you know that the Market Research Intellect’s latest report on “Global CI/CD Tools Market” predicted that the CI/CD market is proliferating and will grow exponentially in the forecast period, 2019 to 2026?

This statistic is enough to understand how the CI/CD pipeline is getting traction in application development. Understanding the CI/CD pipeline is necessary to know all relevant facts behind its popularity. Thus, the article will discuss the evolution of CI/CD tools and practices with time.

Understanding the CI/CD Pipeline and its role in DevOps

Continuous Integration and Continuous Delivery, or CI/CD, is a systematic approach to application development and deployment. It is wholly based on the automation of building, testing, and deploying codes on a single platform.

The CI/CD pipeline is available on many DevOps platforms where software companies can run an integrated chain of tools during development cycles. It is a framework of three stages: Continuous Integration, Continuous Delivery, Continuous Deployment, and Continuous Verification. However, most enterprises shy away from the last two stages mainly because they want one last manual intervention rather than leave it to an automated process. These stages are well-structured to develop robust software in a given time frame across multiple teams. Test automation in every stage helps track issues at the early stages of application development which is also termed as shift-left testing.

Often people get confused with DevOps and consider it as a method. DevOps is not a method but a combination of various tools, concepts, and processes to increase software delivery cycles and make them more reliable than the traditional software development approach. In layman terms, we can define DevOps following agility and collaboration principles to build, deploy, and deliver resilient applications in a secured environment. DevOps permits product and platform engineering teams to work together throughout the life cycle of application development. A CI/CD pipeline makes it practically possible to achieve this objective as  teams can easily collaborate to scale their developments and deployments.

DevOps also offers a subset of practices called DevSecOps to integrate security in all phases of application development. Identifying bugs and vulnerabilities in the early stages of the application development process assists companies to make better decisions concerning possible security risks. It is impossible to find issues with the traditional development approach until the deployment phase. In simple words, conventional security processes are not compatible with the faster agile DevOps practices. With a CI/CD approach to security, all scans can be shifted left to track and fix issues right in the initial stages of CI, thus helping save time.

Hence, the primary purpose of integrating CI/CD and DevOps is to bring a single solution to the table to resolve the issues of safety, speed, and flexibility with the traditional development approach.

Imagine a case; there is an application, “Diary” where 5 developers work separately in their developing environment. One developer makes code changes that impact the coding of other developers. This approach can make any application unreliable but also increases its development time. But, with the CI/CD pipeline, these five developers can work in a collaborative environment, and changes done by one developer won’t impact other codes. It becomes possible because the test automation enables finding out issues earlier and supports delivering high-quality software. It also helps improve transparency and increase release cycles.

With a growing demand for a viable CI/CD practice for DevOps teams, the outcome was an emergence of multiple CI/CD tools & platforms.  Jenkins for example established itself as the go-to CI/CD platform. Often, at this time and age, these tools are known as the first generation of CI/CD solutions.

These platforms made the development process easier but being heavily dependent on user interfaces started creating issues. The major challenges were associated with maintenance, scalability, operations, flexibility, and security because of too many plugins, reliance on jobs, no strategy of rollback, and verification in case of failed deployments or downtimes. The problems were not with the platforms but with their appropriate usage which brought challenges during implementation. There were skill gaps and teams erred while testing and deploying apps for the first time with these CI/CD platforms. Their inefficient practices failed to provide flexibility, agility, and reliability. But with time and considerable investments later, teams did become used to these tools and have remained so to date, despite the shift to multi-cloud deployments of microservices which require multiple releases a day to stay relevant, something that traditional CI/CD platforms desperately fall short in providing for.

Changes in requirements and demands have led to innovations in DevOps with several spin-off processes like GitOps and dedicated platforms for executing this method of development and deployment. The DevOps space is filled with new-age platforms like Harness, Codefresh, GitLab , Azure DevOps, and many more.  These platforms help overcome the challenges with frequent releases and deploying microservices across clouds. The following points articulate the features of these platforms for faster software delivery:

Every platform has its specific feature and some drawbacks. Irrespective of those, these platforms support DevOps teams to ensure efficient software delivery which is a common trait.

At this moment, based on requirements, we have teams still using a legacy tool like Jenkins for smaller projects while others subscribe to advanced cloud-based solutions that are listed in the previous section. Still, these are not sufficient to manage big projects that demand exceptionally high application availabilities and several releases a day across multiple environments and clouds. This high demand for powerful features that are cloud and Kubernetes-native by design is fuelling the launch of frameworks that help create end-to-end CI/CD platforms that have a very low learning curve and help eliminate external tool and plugin dependencies.

Smaller companies find it hard to onboard an entirely new DevOps platform that requires high investments (for both the platform and their DevOps tool chains) in time and money. Bigger enterprises on the other hand need to deal with attritions and re-skilling their new teams to work with the platforms.

There is hence a very high need to dilute deployment complexities, abstract away DevOps tools, and have a templated approach to configuring tasks such that a CI/CD pipeline can be built in just a few clicks. Teams need to enhance their products and focus on value delivery, rather than working around a CI/CD platform.

Tekton is one such framework that focuses on standardizingCI/CD pipelines, which can then be re-used for similar activities rather than configuring a new one every time for multi-cloud deployments.

Tekton is an open-source framework from Google which can be  used as an extension on a Kubernetes cluster. It consists of Kubernetes Custom Resources for creating or reusing pipelines and as it is Kubernetes-native, teams can use either API or Kubernetes CLI to use Tekton.

Though the benefits of standardization and reusability of CI/CD pipelines are quite appealing, the Tekton framework is nonetheless complicated for end-users to work with. There is a need of abstracting away these complexities and providing a platform that sits atop, and better extends its capabilities. Think of it as a piece of equipment with complicated engineering and intricate wiring, that requires a simplified UI to work with and leverage the full potential of the equipment. Ozone is just that.

The Ozone CI/CD platform not just abstracts away the complexities of Tekton, but also adds its own set of values in terms of native capabilities and powerful integrations to drive security, interoperability, and reliability to support cloud-native deployments.  The platform uses Tekton reusable pipelines to deploy applications quickly and  permits the team to install and run Tekton as an extension on the Kubernetes cluster with the help of the Kubernetes resource model.

Here’s a pictorial reference to how Ozone helps streamline all the stages across a CI/CD pipeline with details on its supported integrations and out-of-the-box capabilities: 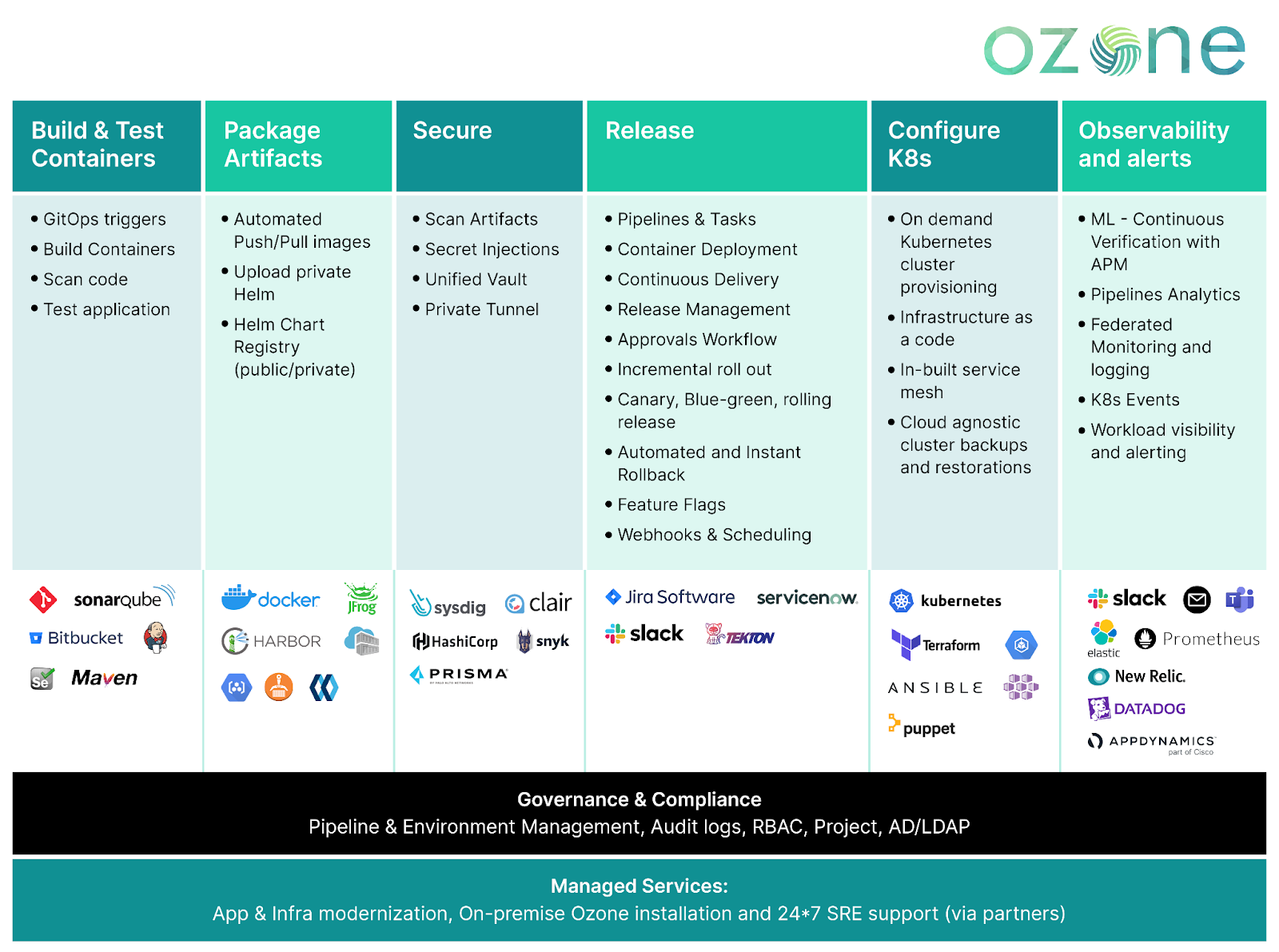 The CloudBolt Industry Insights report highlighted that only 4% of companies assume themselves as CI/CD experts even after having many resources, tools, and investments. Any reason might be behind this, such as lack of expertise, inabilities to use resources appropriately, and no strategic plan. Irrespective of all these, our platform Ozone succeeds in offering a reliable CI/CD platform to their customers to deliver applications seamlessly. Efficiency, flexibility, and reliabilities are our platform’s features that assist us to fulfil our commitment to faster application delivery without compromise in value.

Ozone is focused on eliminating every complexity of a DevOps team. It simplifies and automates containerized and decentralised application deployments across hybrid cloud and diverse blockchain networks. Ozone integrates seamlessly with major tools across CI, CD, analytics and automation to support your software delivery end to end for even the most complex scenarios.

Write to us at [email protected]

What is The CI/CD Pipeline and How Does It Work?

Have you been hearing a lot about CI/CD pipeline of late? Are you curious about what it is and what are the uses of CI CD pipeline? Would you prefer your engineering team to produce high-quality code quickly and without errors? Seriously, who wouldn’t? To do that sustainably over time, you need a quick and […]

The Basics of Software Release Management

Introduction to Software Release Management Every business wants to excel in its domain and capture a share of the market before its competitors do, or before the market dynamics change, which can quickly make applications obsolete. This fear of missing out is driving software companies to constantly update their products to keep up with dynamic […]

DevOps is a philosophy and set of practices that aim to improve collaboration and communication between software development and operations teams and to streamline the process of building, testing, and deploying software. CI/CD is a key component of this process, as it helps to automate the build, test, and deployment steps, which can speed up […]

There’s no doubt that Kubernetes has seen an increase in adoption over the last few years. However, so has the complexity of working and managing them as you scale, especially monitoring and logging post-deployments. One needs to adopt new strategies for Kubernetes monitoring while working with limited tools available today, which can be quite a […]